Sep 25 – Our first day is great in Tarangire. We enjoyed seeing lot of elephants some of them came very close to our vehicle and also we saw four Serval cats and they like birds too they took lots of pictures. Rae and Jim are very happy and tomorrow we leave at six for a full day game drive.

Sep 26 – Today was a wonderful day we saw and took pictures of lot of beautiful birds and also we enjoyed seeing two prides of lions one with two and the other one with three which were very close and was lucky enough because we were the only ones who saw them. My friends are very happy as we saw them after involving them in the art of finding animals then after 7 hours we managed to find them it was awesome. 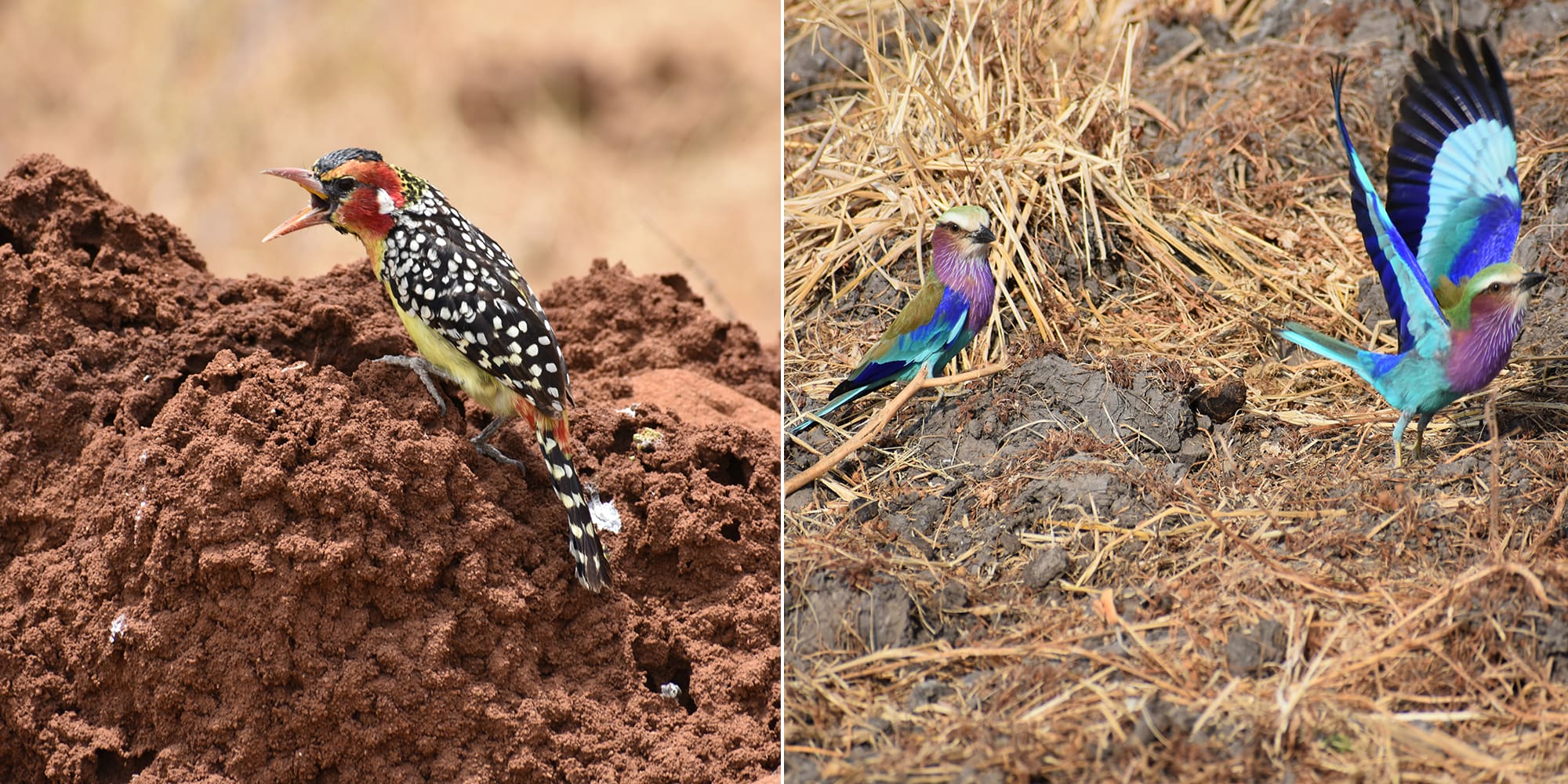 A lioness and her cub playing around

Sep 27 – Today we saw tree climbing lions a pride of five then we saw a pride of 13 lions of which it’s consist of 3 males, six females and two Cubs with one young male. And many wildebeest and zebra with some elands during the breakfast. The ambiance of the place is unique! Sep 28 – After morning game drive we had a breakfast and went for a walk we enjoyed learning and discovering that’s awesome and also walking close to the elephants. This evening we enjoyed sundowner and saw some elephants and tree climbing lions again.  It’s awesome at Chem Chem!

On a walking safari; sundowners with their guide Mkenda

Sep 29 – Today was another fabulous day as we saw three lioness with eight tiny cubs in the Ngorongoro Crater. We also eventually we saw flamingos and a mother rhino with a very young baby that’s amazing the clients enjoyed very much and are very excited about tomorrow when we embark to the Serengeti they’re looking forward to seeing some cheetahs and leopards. Sep 30 – Our Expedition of learning and discovering continues learning about culture by visiting a Maasai manyatta and Olduvai Gorge,  known first site to find out the oldest skulls of human kind a cradle of human. And then go to the plains of the Serengeti the cheetah’s country very close to Namiri plains.

Oct 01 – Today was another amazing day we started at six. We had picnics for both Breakfast and lunch. Right before breakfast while we were in pursuit of cheetahs, we saw a serval, a black rhino and several big male lions. We did not see a single vehicle the entire morning!

Black rhinos are very rare to see in the Serengeti; a hunting cheetah; a photogenic lion

Later we saw Aardwolf, hyenas and elephants and then in the evening we saw our cheetah. The clients were blown away by what we saw we were very lucky especially for the rhino who thought we can see a rhino in the Namiri plain we were hunting for cheetahs and then we saw it! Can’t explain excitement. Oct 02 – Another amazingly productive day at Ehlane Plains Camp. We saw 7 cheetahs, first a mother with her cub and then later on another mother with two cubs. We also saw two cheetah trying to hunt. We stayed with them for hours, but whenever they tried to hunt, hyenas would discourage them. It was great opportunity to learn interaction between the two.

Before returning to camp, we had a great sundowner in the bush!

Sundowners and celebration at Ehlane Plains!

Oct 04 – It’s awesome to finished safari seeing a leopard with two cute cubs on a tree and making 4 leopards. We also saw a coalition of three brothers cheetahs  and lots of hippos at dawn – it was awesome! We also saw some lions and a crocodile. The clients are very happy to be able to know and enjoy lots of birds, 55 lions, 12 cheetahs, 5 Serval cats, one caracal and aardwolf that was incredible. They are off to see the Migration now at Sayari.

Leopard sitting in a tree / wildebeests crossing the Mara River