Named after the Tarangire River, this national park is one of Africa's most scenic. It's the best place on Tanzania's Northern Circuit to see lions in trees and large elephant herds. Baobab trees, granite ridges, mixed acacia woodland and grassland cover this 1096 mi² national park.

Tarangire’s wildlife includes buffalo, eland, elephant, Maasai giraffe, oryx, zebra and wildebeest. Other prominent species include Grant’s and Thomson’s gazelle, hartebeest, impala, lesser and greater kudu, leopard, cheetah and spotted hyena. The birdlife is quite prolific in Tarangire as well; over 550 species have been recorded. When the short rains begin in November, zebra, elephant and buffalo migrate away from the park. They return around June, once the long rains subside. 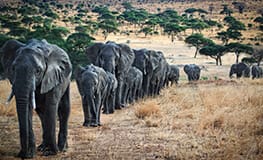 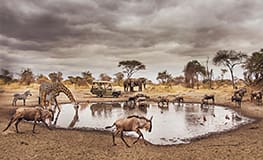 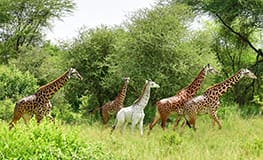 Nasikia Tarangire Tented Camp - Msangi and the team went out of their way to make it memorable.

Nasikia Tarangire Tented Camp – Msangi and the team went out of their way to make it memorable. Our first night we got settled in and had a terrific dinner. And then came the magic. The entire team and Wilson came into the dining...

Located along the Tarangire River, Forest Chem Chem is an intimate exclusive-use property. Ideal for for families, it can accommodate up to 6 adults and 2 children in two vintage

Kuro Tarangire is set amid a grove of Acacia and Kigelia trees on the banks of the Tarangire River. The camp features six large safari tents built of canvas, wood and thatch each

Lemala Mpingo Ridge is centrally located in Tarangire National Park, perched on an escarpment and enjoys sweeping views across the valley. Accommodations include 15 tented suites

Located in a private concession within the southern section of Tarangire National Park, Little Oliver’s consists of five luxury, en suite tents each with both an indoor and

Maramboi Tented Lodge is located on the shores of Lake Manyara and in the migratory corridor between the Tarangire and Lake Manyara ecosystem. Forty-four spacious tents are

Oliver’s Camp is located inside the southern region of Tarangire on an elevated ridge overlooking a flood plain. The ten oversized tents provide a classic bush experience with

Tarangire Safari Lodge is situated within Tarangire National Park. The lodge is built on an escarpment overlooking the Tarangire River and features tents, bungalows, a dining room,

Tarangire Sopa Lodge has 75 rooms with a large lobby and dining area. Internet access is available to guests in the public areas. The large swimming pool overlooks the park. The

Tarangire Treetops is located in a private reserve just outside the border of the park. Overlooking the Tarangire Sand River, the camp can offer magnificent views of the resident